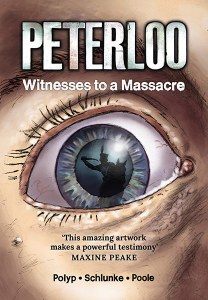 Peterloo : Witnesses to a Massacre

The explosive tale of Peterloo, told through the voices of those who were there. This is a vivid, original and historically accurate 'comic book' visual account of the 1819 Manchester massacre, to be published as part of the 200th anniversary commemorations. More than 15 people died and 600 were severely wounded by sabre-wielding troops at a peaceful pro-democracy rally.

This a vital record of working-class history by Manchester-based authors and artists who have been central in reviving the long-suppressed memory of this shocking and world-changing event.