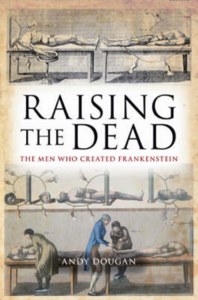 Raising The Dead : The Men Who Created Frankenstein

Mary Shelley's 1818 novel, "Frankenstein", introduced readers around the world to the concept of raising the dead through scientific procedures. Those who read the book were thrilled by this incredible Gothic adventure. Few, however, realised that Shelley's story had a basis in fact.

What she imagined as her modern Prometheus was a serious pursuit for some of the greatest minds of the early 19th century. It was a time when scientists genuinely believed, as Frankenstein did, that they could know what it feels like to be God."Raising the Dead" is the story of the science of galvanism - named after the Italian scientist Luigi Galvini who had conducted the original experiments - a movement that investigated the theory of 'animal electricity', a unifying vital spirit that animates us all, its leaders believing that they stood on the brink of immortality. While they ultimately failed in this challenge, their studies mapped out the nervous system and made valuable and enduring contributions to modern-day medical knowledge and understanding - from theorising the concept of the modern-day defibrillator, and 'deep brain stimulus' which is used to treat personality disorders, to experimental procedures involving the use of microchip-controlled devices to bridge damaged spinal nerves.

Journey: An Illustrated History of Travel

The Book of Humans

The Greatest Stories Ever Told