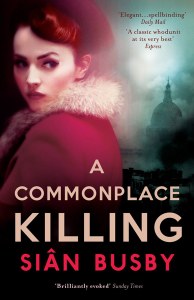 
London, July 1946. A woman's body is found in a disused bomb site off the Holloway Road. She is identified as Lillian Frobisher, "a respectable wife and mother" who lived with her family nearby.

The police assume that Lillian must have been the victim of a sexual assault; but when the autopsy finds no evidence of rape, they turn their attention to her private life - How did she come to be in the bomb site, a well-known lovers' haunt? Why was her husband seemingly unaware that she'd failed to come home on the night she was killed? In this deeply evocative crime drama, Sian Busby strips away the veneer of stoicism and respectability in post-war Britain to reveal a society riven with disillusionment and loss.

Sian Busby's novel, set in a demoralised post-war Britain, can simply be enjoyed as a police procedural appealing to fans of Foyle's War and George Gently but this assessment fails to acknowledge the really excellent feel for the atmosphere of the period which the novel evokes. The shifting perspective between Lil's last days and Cooper's investigation means that the identity of the killer is not a mystery for long but the how and why is withheld till the end. In 1946 the war is over but victory has not bought everyone the anticipated rewards. Men who fought for their country are now out of work living in dirty bomb-damaged houses with wives they no longer recognise. Returned servicemen battle deal with Post Traumatic Stress long before this was an acknowledged condition. Above the bombsites stand advertising hoardings touting luxury products no-one can get. Women are struggling with the rationing and endless queues and miss the freedom and opportunities of the war years. Resentment and disillusion hangs in the air. This is not a cheery read but it is an absorbing and well-written novel and one I found difficult to put down. Sally Hughes Assistant Retail Manager