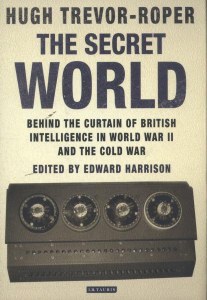 The Secret World: Behind the Curtain of British Intelligence in World War II and the Cold War

During World War II, Britain enjoyed spectacular success in the secret war between hostile intelligence services, enabling a substantial and successful expansion of British counter-espionage which continued to grow in the Cold War era. Hugh Trevor-Roper's experiences working in the Secret Intelligence Service (MI6) during the war left a profound impression on him and he later observed the world of intelligence with particular discernment. To Trevor-Roper, who was always interested in the historical dimension of the present and was fully alive to the historical significance of the era in which he lived, the subjects of wartime intelligence and the complex espionage networks that developed in the Cold War period were as worthy of profound investigation and reflection as events from the more-distant past.

Expressing his observations through some of his most ironic and entertaining correspondence, articles and reviews, Trevor-Roper wrote vividly about some of the greatest intelligence characters of the age. The Secret World unites Trevor-Roper's writings on the subject of intelligence - including the full text of The Philby Affair and some of his personal letters to leading figures.

Based on original material and extensive supplementary research by E.D.R Harrison, this book is a sharp, revealing and personal first-hand account of the intelligence world in World War II and the Cold War.