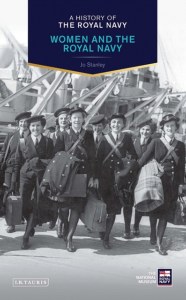 As nurses, `Jenny Wrens', and above all as wives and mothers, women have quietly kept the Royal Navy afloat throughout history. From its earliest years, women maintained homes and families while men battled at sea, providing vital support behind the scenes. Later they also ran maritime businesses and worked as civilians in naval offices and dockyards.

From 1884, women were able to serve as nurses in the Queen Alexandra's Royal Naval Nursing Service and, from 1917, they became members of the Women's Royal Naval Service. The outbreak of both world wars gave women special opportunities and saw the role of women as Wrens, nursing sisters, VADs and medics change and develop. In more recent times, the development of equal rights legislation has fundamentally changed naval life: women are now truly in the navy and do `men's jobs' at sea.

Using previously-unpublished first-hand material, this is the first book to reflect all the diverse roles that women have played in Royal Navy services. Jo Stanley situates women's naval activities within a worldwide context of women who worked, travelled and explored new options. This book provides vital new perspectives on both women's military history and the wider history of women who desired to work on or near the sea.