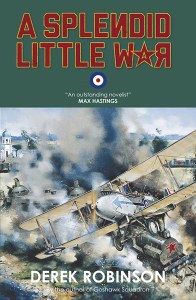 The war to end all wars, people said in 1918. Not for long. By 1919, White Russians were fighting Bolshevik Reds for control of their country, and Winston Churchill (then Secretary of State for War) wanted to see Communism 'strangled in its cradle'.

So a volunteer R.A.F. squadron, flying Sopwith Camels, went there to duff up the Reds. 'There's a splendid little war going on,' a British staff officer told them.

'You'll like it.' Looked like fun. But the war was neither splendid nor little. It was big and it was brutal, a grim conflict of attrition, marked by incompetence and corruption.

Before it ended, the squadron wished that both sides would lose. If that was a joke, nobody was laughing.