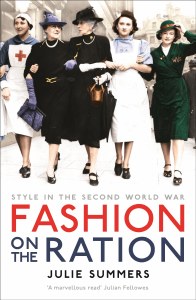 Fashion on The Ration

Fashion On The Ration

In September 1939, just three weeks after the outbreak of war, Gladys Mason wrote briefly in her diary about events in Europe: 'Hitler watched German siege of Warsaw. City in flames.' And, she continued, 'Had my wedding dress fitted. Lovely.' For Gladys Mason, and for thousands of women throughout the long years of the war, fashion was not simply a distraction, but a necessity - and one they weren't going to give up easily.

In the face of bombings, conscription, rationing and ludicrous bureaucracy, they maintained a sense of elegance and style with determination and often astonishing ingenuity. From the young woman who avoided the dreaded 'forces bloomers' by making knickers from military-issue silk maps, to Vogue's indomitable editor Audrey Withers, who balanced lobbying government on behalf of her readers with driving lorries for the war effort, Julie Summers weaves together stories from ordinary lives and high society to provide a unique picture of life during the Second World War. As a nation went into uniform and women took on traditional male roles, clothing and beauty began to reflect changing social attitudes.

For the first time, fashion was influenced not only by Hollywood and high society but by the demands of industrial production and the pressing need to 'make-do-and-mend'. Illustrated and full of gorgeous detail, Fashion on the Ration lifts the veil on a fascinating era in British fashion.