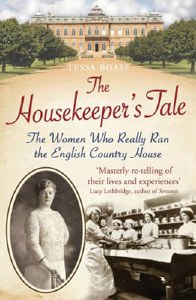 Working as a housekeeper was one of the most prestigious jobs a nineteenth and early twentieth century woman could want - and also one of the toughest. A far cry from the Downton Abbey fiction, the real life Mrs Hughes was up against capricious mistresses, low pay, no job security and gruelling physical labour. Until now, her story has never been told.

The Housekeeper's Tale reveals the personal sacrifices, bitter disputes and driving ambition that shaped these women's careers. Delving into secret diaries, unpublished letters and the neglected service archives of our stately homes, Tessa Boase tells the extraordinary stories of five working women who ran some of Britain's most prominent households. There is Dorothy Doar, Regency housekeeper for the obscenely wealthy 1st Duke and Duchess of Sutherland at Trentham Hall, Staffordshire.

M. Barrie. And there is Grace Higgens, cook-housekeeper to the Bloomsbury set at Charleston farmhouse in East Sussex for half a century - an era defined by the Second World War.