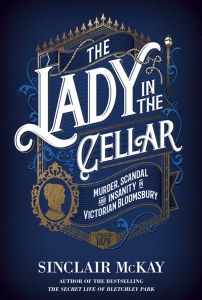 Lady in the Cellar : Murder, Scandal and Insanity in Victorian Bloomsbury

Standing four storeys tall in an elegant Bloomsbury terrace, number 4, Euston Square was a well-kept, respectable boarding house, whose tenants felt themselves to be on the rise in Victorian London. But beneath this genteel veneer lay a murderous darkness. For on 9th May 1879, the body of a former resident, Matilda Hacker, was discovered by chance in the coal cellar.

The ensuing investigation stripped bare the dark side of Victorian domesticity, revealing violence, sex and scandal, and became the first celebrity case of the early tabloids. Someone must have had full knowledge of what had happened to Matilda Hacker. For someone in that house had killed her.

So how could the murderer prove so elusive? In this true story, Sinclair McKay meticulously evaluates the evidence and, through first-hand sources, giving a gripping account that sheds new light on a mystery that eluded Scotland Yard.

The Suspicions Of Mr Whicher