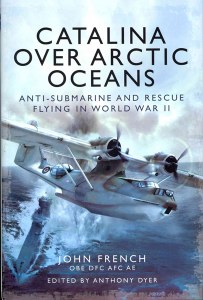 John French first took up flying in 1937 with the University of London Air Squadron, and this move was to signal the start of a long and varied career in flight which would see him involved in some of the most iconic wartime exploits of the Twentieth Century. Posted to Gibraltar in the midst of war, he flew sorties in support of the North African landings during Operation Torch, a particularly interesting episode in Second World War history. From here, he was to work on the iconic Catalina the spectacular water plane, employed to such great effect in an array of military operations in the latter half of the Twentieth Century. His exploits are relayed in vivid, first hand detail, offering fresh insights into this period of history from a man engaged at the heart of the action. Post war exploits flow into accounts of wartime engagement, and there is space too in which to detail John's post-war career behind the Iron Curtain.

Diary entries, edited and complied by his grandson Anthony Dyer, have been lovingly woven together to create a complete narrative which spans a career of such wide ariety and achievement to make it perfect material for a book such as this.