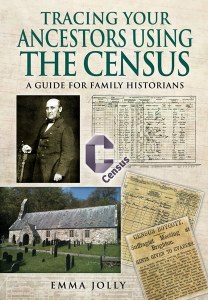 Tracing Your Ancestors Using The Census

Tracing Your Ancestors Using The Census : A Guide for Family Historians

The Pen & Sword guide to the census is detailed, accessible and authoritative, and it is one of the most comprehensive on the market. It has been written with the family historian in mind, and it is packed with advice on how to explore and get the most from the census records. As well as describing the modern censuses, it provides information on the less-known censuses dating from before 1841, and it covers the records of all the constituent parts of the British Isles. It is an essential introduction and tool for anyone who is researching the life and times of an ancestor.

Emma Jolly describes how and why census records came to be created, then looks in detail at how to search the main censuses from 1841 to 1911. Each chapter covers the relevant historical context, compares online and other sources, identifies problems like lost or damaged records, and shows how the specific information in the census concerned can be interpreted effectively.

While the censuses of England and Wales, Scotland, Ireland, the Channel Islands and the Isle of Man are all examined, the main focus is on the English and Welsh census, with differences noted for other areas. An extensive appendix and bibliography, which, for ease of access, gathers together all the key resources in one place, is also provided.

Many books have been written about the Census, so any new book needs to offer something not found elsewhere to make it stand out. Emma Jolly's book has enough of these to make it a worthwhile purchase, for experienced researchers as well as beginners. Since it is aimed at genealogists, she provides helpful tips for using the census. Some are common to all census years, but each has its own characteristics and problems. Every census from 1841 to 1911 has its own chapter which includes background information, finding aids, online resources and special features of that year, such as the way people on board ships were enumerated. She deals with the Scottish census in some detail, superficially similar to England and Wales, but with significant differences too. Ireland is also well-covered, although there is no surviving complete census for Ireland before 1901. The book is particularly strong on the strengths and weaknesses of commercial and free websites providing census images, indexes and transcripts. Each census is placed in its historical context, each chapter opening with a summary of the major events of the preceding decade - it is all too easy to become immersed in the minutiae of a particular census, forgetting that there was a whole world outside where our ancestors spent their actual lives, not just the fragments recorded in official documents. One of the most helpful sections is the chapter on early censuses, which summarises surviving local holdings, and lists many online resources. She also lists census substitutes and alternatives, with web links where applicable, and throughout the book suggests related areas of research, from tithe maps in the 1840s to the Valuation Office survey from 1911. There are comprehensive footnotes, appendices and a detailed bibliography, making this a useful reference work as well as a good read. Audrey Collins, Records Specialist Family History

The Butcher, The Baker, The Candlestick Maker

Making Sense of the Census Revisited