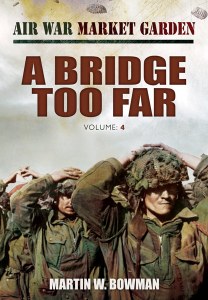 This, the fourth and final volume of the series on Market-Garden in September 1944 reveals the final fate of the troops at Oosterbeek and the decision to evacuate all able bodied men in Operation 'Berlin' as well as the subsequent Operation 'Pegasus' when the Allies tried to return as many beleaguered troops back to Allied lines as possible. Was Arnhem indeed 'a bridge Too Far'? While 'Market-Garden' certainly was a heroic failure conducted at great cost it is debatable whether it contributed materially to the ultimate victory or was a foolish sacrifice of thousands of troops, aircrew and Dutch civilians in an ill-conceived assault on the German-held bridges across the Lower Rhine. There is no doubting the gritty, gallant and valorous contribution on the part of the British, Dominion, American and Polish paratroopers, the RAF and USAAF aircrews and their German opponents and Dutch civilians.

Their incredible, illuminating and often under-stated accounts of extraordinary courage, camaraderie, shared terror and encounters with the enemy offer a more personalised view of 'Market-Garden' through the words of those who were there at the heart of the action. These tales are complemented by the author's background information supplemented by the inclusion of daily timelines that give an overall picture of each battle and air operation.