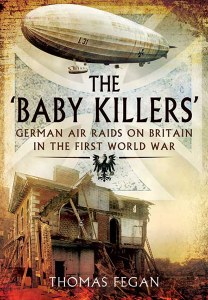 The First World War airship and aeroplane raids by Germany on Britain constituted the first strategic bombing campaign in history. It was a novel and unwelcome means of waging war that provoked panic and resentment, and dispelled Britain's island sense of security. The raiders, demonised as 'baby killers' for causing indiscriminate civilian casualties, may not have crushed British morale, but they disrupted war production and succeeded in diverting personnel, arms and aeroplanes from where they were needed most at the Front.

Most important, the raids changed the face of warfare for ever by bringing the whole nation into the front line. The book features previously unpublished photographs and is divided into a history of the raids as they occurred, and a gazetteer with detailed information about many of the placed that were bombed. Attention is drawn to the physical scars made by the raids that may still be seen today, and to the memorials erected to the victims.