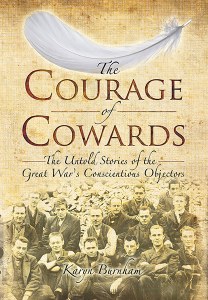 Courage Of Cowards : The Untold Stories of The Great War's Conscientious Objectors

To many they were nothing more than cowards, but the 'conchies' of the First World War had the courage to stand by their principles when the nation was against them...An innovative new history of conscientious objectors during the First World War. Drawing on previously unpublished archive material, Karyn Burnham reconstructs the personal stories of several men who refused to fight, bringing the reader face-to-face with their varied, often brutal, experiences.

Charles Dingle: Defying his father's wishes by objecting to military service, Charles joins the Friends Ambulance Unit and finds himself in the midst of some of the fiercest fighting of the war.

Jack Foister: Jack, a young student, cannot support the war in any way. Imprisoned and shipped secretly out to France, Jack has no idea what lengths the military will go to in order to break him.
James Landers: A Christian and pacifist, James faces a dilemma: if he sticks to his principles, he faces imprisonment but if he joins the Non Combatant Corps he can financially support his family.

Gripping accounts reveal the traumatic and sometimes terrifying events these men went through and help readers to discover what it was really like to be a conscientious objector.


Jack Foister - Born 1893 in Chesterton in Cambridgeshire. A student at Cambridge at the outbreak of war, but a teacher in Peterborough when he was called up. Jack refused to take any part in the war, was imprisoned in Harwich Redoubt before being secretly shipped to France with several other COs.

Areas that may be interested: Cambridgeshire (Cambridge, Peterborough), Harwich James Landers - Born in 1893, in Salford. Joined the NCC, billeted at Kinmel Park near Abergele in N.Wales, then in Ormskirk, Lancs. Refused to follow any further orders and was imprisoned in Wormwood Scrubs.

Areas that may be interested: Manchester, Salford, Eccles, Ormskirk, Denbighshire (Abergele/Rhyl) Walter Roberts - Born in 1897 in Cheshire. Walter refused to take any part in the war, was imprisoned before taking a place on a government work scheme at Dyce Camp near Aberdeen, where he died. Areas that may be interested: Cheshire (Chester, Winsford, Macclesfield) Manchester, Salford, Aberdeen.