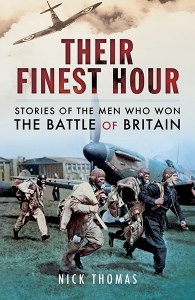 Their Finest Hour tells the fascinating stories of six of Churchill's 'Few', each of whom played an important part in the Battle of Britain. Celebrated and much respected on their own squadrons, all have since faded into obscurity. Their achievements, against all odds, and the fortunes of their comrades-in-arms, many of whom died during the Battle, are told here in detail, some for the first time.

This has been done in an effort to retrieve these stories from obscurity, bringing them to a wider audience and ensuring they are not forgotten. Featured stories include that of Flying Officer Reginald Peacock DFC, the only Blenheim pilot of the Second World War to become a fighter ace; Squadron Leader Robert Reid, who flew throughout the Battle of Britain, having a hand in the destruction of three Bf 109s, and the damaging of two more; and Pilot Officer Douglas Cyril Winter, who flew Spitfires during the defence of the Dunkirk Beaches, before taking on the Luftwaffe in the skies over Southern England. All these stories offer insights into this dynamic period of aviation history.Recorded here, they serve as poignant reminders of the efforts of the 'Few' and the contributions that they made to the Allied effort during the Second World War.