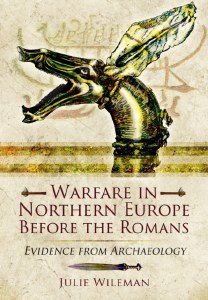 Warfare In Northern Europe Before The Romans

Warfare in Northern Europe Before the Romans : Evidence from Archaeology

Julie Wileman challenges the traditional view of the barbaric fighting which went on prior to the Roman occupation of Northern Europe as she uncovers the true nature of warfare before the Romans. Aspects investigated include what war meant in a pre-state society, the many levels of battle and warfare, the reasons why prehistoric people fought, evidence of early attacks and massacres, ways in which prehistoric war can be identified, heroic warfare, and the rise of war in the Iron Age. Wileman also looks at the Roman evidence for the portrayal of the drunken, savage and barbaric fighting as well as the tactics they employed against one another, why certain battles were won and lost, and which aspects went on to influence Roman warfare in later centuries.

Warfare in Northern Europe Before the Romans provides an exciting read for both archaeologists and military historians interested in how warfare developed outside of classical Europe as well as being one of the only books in the area accessible to the non-academic reader.