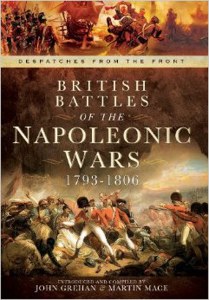 The Napoleonic Wars was truly a world-wide conflict and Britain found itself engaged in battles, sieges and amphibious operations around the globe. Following every battle the commanding officer submitted a report back to the Admiralty or the War Office. Presented here together for the first time are those original despatches from some forty generals, captains and admirals detailing more than eighty battles that took place in India, Africa, Europe and the Americas.

This unique collection of original documents will prove to be an invaluable resource for historians, students and all those interested in what was one of the most important periods in British military and naval history. The reports include those from some of Britain's most famous battles, the likes of Trafalgar and Waterloo, as well as less well-known but just as important engagements which resulted in the capture of the islands and territories which helped form the greatest empire the world has ever known.