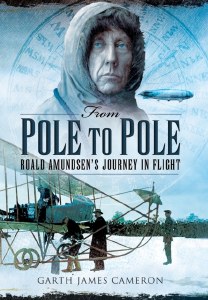 From Pole to Pole

From Pole to Pole : Roald Amundsen's Journey in Flight

Roald Amundsen (1872-1928) was the most successful polar explorer of his era using sledges, dogs, ski and ships. He is mainly remembered for being the first man to reach the South Pole on 14 December 1911. What is less often remembered is that he was also the first man to reach the North Pole on 12 May 1926 as the leader of the Amundsen-Ellsworth-Nobile expedition in the airship Norge.

His involvement in aviation from his experiments with man-lifting kites in 1909 to his death in 1928 while flying from Norway to Spitsbergen has not been the subject of a detailed study until now. This book explores Amundsen's enthusiasm for flight from the moment he read about Bleriot's flight across the English Channel in an aeroplane on 25 July 1909. From that moment onwards he was alert to the potential of aircraft as vehicles to explore the portions of the globe which remained unexplored in the first quarter of the 20th century.

The man-lifting kites built by Einar Sem-Jacobsen took the life of his second in command Ole Engelstad and were carried, but not used, during his 1910-1912 expedition to the South Pole. He saw aeroplanes flying in America and Germany in 1913 and in 1914 he was taught to fly by Sem-Jacobsen. He passed his flight test on a Farman Longhorn biplane on 1 June 1914 and in mid-1915 was issued with the Federation Aeronautique Internationale (Norge) aeroplane pilot's certificate number one.

He bought a Farman biplane to take with him on an expedition to the North Polar Sea but the outbreak of the Great War stopped the Expedition and Amundsen gave his Farman to the Norwegian government. After the war he acquired a Curtiss Oriole biplane and two Junkers F13's then in 1925 he embarked on a flight, which he barely survived, to the North Pole in two Dornier Wal flying boats. 1926 brought long delayed success when the Norge flew to the Pole and on to Alaska.

On 18 June 1928 he and five companions took off from Tromso on a search and rescue flight for the missing airship Italia and were never seen again. The only traces of the men and their aircraft were a tip float and an empty fuel tank which washed up on the coast of Northern Norway several months later. Searches of the sea-bed near Bear Island for the remains of the Latham 47 flying boat he was flying in took place in 2004 and 2009 and interest in the mystery of his disappearance remains high.

Knights and Castles Press Out And Make

Legends of The Tour Graphic Novel

Queen Victoria: A Life Of Contradictions

Rise Of The Tank

Sea Charts of the British Isles

The Rings of Saturn

The Second World War In 100 Objects

The Struggle for Sea Power