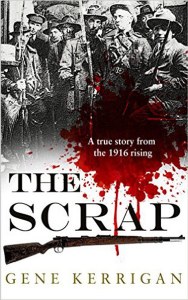 In the last hours of the 1916 Easter Rising, 20-year old Charlie Saurin came face to face with his Commander-in-Chief, Patrick Pearse. In a final gamble, Pearse had a desperate plan to save the collapsing rebellion. It required the sacrifice of Saurin and his comrades.

The Scrap is the true story of the rising, from first-hand evidence, as seen by one rebel unit - F Company, 2nd Battalion - following them from the first skirmish in Fairview to the inferno of the GPO. Told in the context of some of the major events of that week, the story of F Company brings alive the excitement, the humour, the horror and the contradictions of that decisive moment in the creation of the Irish state.