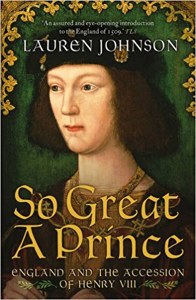 So Great A Prince : England and hte Accession of Henry VIII

The King is dead: long live the King. In 1509, Henry VII was succeeded by his son Henry VIII, second monarch of the house of Tudor. But this is not the familiar Tudor world of Protestantism and playwrights.

Decades before the Reformation, ancient traditions persist: boy bishops, pilgrimage, Corpus Christi pageants, the jewel-decked shrine at Canterbury. So Great a Prince offers a fascinating glimpse of a country and people that at first appear alien - in calendar and clothing, in counting the hours by bell toll - but which on closer examination are recognisably and understandably human. Lauren Johnson tells the story of 1509 not just from the perspective of king and court, but of merchant and ploughman; apprentice and laundress; husbandman and foreign worker.

She looks at these early Tudor lives through the rhythms of the ritual year, juxtaposing political events in Westminster and the palaces of southeast England with the liturgical and agricultural events that punctuated the year for the ordinary people of England.