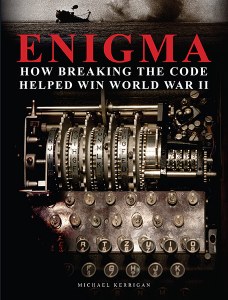 Enigma tells the story of Bletchley's impact on the war, including the outwitting of U-boat threat in the Battle of the Atlantic; helping the Allies to victory in the Mediterranean by identifying Axis naval and air movements; understanding German plans and troop dispositions before the Normandy landings; and helping to sink the German battleship Scharnhorst off the coast of Norway.

In tracing these evenst the book also delves into the stories of major Bletchley characters : boffins such as Alan Turing; Gordon Welchman, an early metadarta analyst and Debs such as Mavis Batey who decyphered the Italian naval Enigma code and gave the British Royal Navy a crucial advantage in the Battle of Cape Matapan.

Illustrayed with 180 photographs, artworks and maps Enigma helps explain the vital work of code breakers in helping the Allies win many key battles and camapigns in World War II.