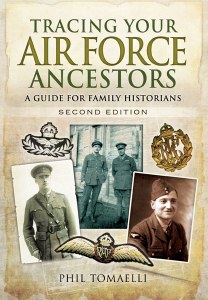 In this fully revised second edition of his best-selling Tracing Your Air Force Ancestors Phil Tomaselli explains which records survive, where they can be found and how they can help you in your research. Whether you are interested in the career of an individual air-man or woman, researching medals awarded to a pilot or crew member or just want to know more about a particular squadron or operation, this handbook will point you in the right direction. Each era in air force history is described, from the pioneering days of early aviation and the formation of the Royal Flying Corps in the First World War to the creation of the Royal Air Force, its operations during the Second World War and its post-war development.

Phil Tomaselli outlines the evolving organization of the air force in each period. He also provides pointers and examples which should help researchers find the records of units and bases that individuals served in, the kind of work they did, the aeroplanes they worked with and the men and women they worked alongside.

This guide is the fruit of many years of research; the second edition has been necessitated largely by the greatly increased amount of source material available online. It covers the period from Victorian Balloon units (when aspirants had to pay for their own training) to the end of National Service in 1962, and all the functions performed by members of the RAF or its predecessors. For instance, in WW1 the Royal Naval Air Service had an Armoured Car unit, ran armoured trains and helped to develop the tank, while in WW2 there was a Glider Pilot Regiment and RAF nurses. The ninth chapter is an overview of medals and decorations. I was rather surprised to find that campaign medals had to be applied for. I had always assumed they were handed out with the demob suit. The other eight chapters give an account of the developing service and its many branches in historical order, describing the types of record available, whether they are being digitised and how to access them, with the occasional 'case history' of an individual with facsimile documents and photos. The author is helpful about the deficiencies of keyword searches. For instance, if it's a pilot of the Berlin Airlift you are after, some documents will be under 'Berlin' and others under 'Airlift' or even 'Operation Plainfare'. I would have been happier with fewer group photos or fuzzy grey pictures of aircraft called 'Fairey Flycatcher' or 'Blackburn Dart' (indistinguishable to the untrained eye) in favour of facsimile documents big enough to study the layout and contents. But that is a small niggle. The author manages to make the book an interesting read, the really dry material - but such useful stuff - being banished to the appendices. There are nine pages of abbreviations and acronyms. I have some personal interest in the RAF, as my father became an Intelligence Officer during WW2, and I learned from this book that he probably met my mother in Highgate when he was at the RAF Intelligence School there. Likewise my husband, a few years ago with the aid of the RAF Benevolent Fund who had educated him, tracked down his father's grave in the German village where his British, Canadian and Australian crew had been shot down. We looked in vain in this book for any mention of mixed Commonwealth crews, or indeed non-Commonwealth ones. I live not so far from the famous Polish War Memorial on the A40 and would have liked just a mention of the Poles who served with the RAF, many of whom went on to settle within a few miles of their base at Northolt. Is there any particular way to trace them? Still, this is a huge topic with enormous amounts of documentation to cover, and this volume will be extremely helpful to researchers. Hilary Potts The Friends of The National Archives