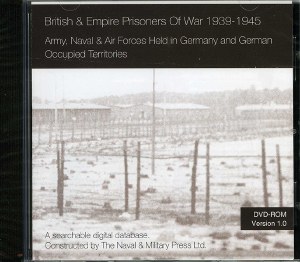 Registers of 107,000 British Army 21,000 Australian, British, Canadian, New Zealand, South African and other Naval and Air Force 41,000 Australian, Canadian, Indian, New Zealand, South African and other military prisoners of war held in Germany and German occupied territories. These records are an important source of information about your WWII Prisoner of War ancestors as both Officers and other ranks are shown. These records complement THE ARMY ROLL OF HONOUR 1939-45.which lists the British Army dead from WW2 and includes more than 145,000 Soldiers.
These remarkable compilations, in there original printed form, were alphabetical nominal registers (including locational and other details) of approximately 169,000 officers and men of the British, Dominion and other allied forces, they were originally published in ten parts by HMSO under the title Germany and German Occupied Territories. Imperial Prisoners of War; Alphabetical Lists. Produced in limited numbers for internal reference, the registers were updated periodically until the last, most comprehensive printing in May 1945. These final editions are now available digitised on fully searchable DVD-Rom format For the Military Genealogist this list is a source of great information. Statistical detail for all data fields is easily accomplished, allowing detail camp by camp to be analysed unit by unit.