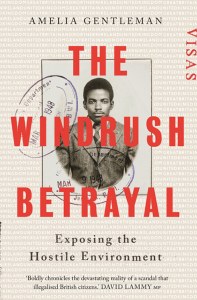 Amelia Gentleman's expose of the Windrush scandal shocked the nation her tenacious reporting revealed how the government's 'hostile environment' immigration policy had led to thousands of law-abiding people being wrongly classified as illegal immigrants, with many being removed from the country, and many more losing their homes and their jobs. In The Windrush Betrayal, Gentleman tells the full story of her investigation for the first time.

Her writing shines a light on the people directly affected by the scandal and illustrates the devastating effect of politicians becoming so disconnected from the world outside Westminster that they become oblivious to the impact of their policy decisions. This is a vitally important account that exposes deeply disturbing truths about modern Britain.

Voices of the Windrush Generation

Windrush A Ship Through Time