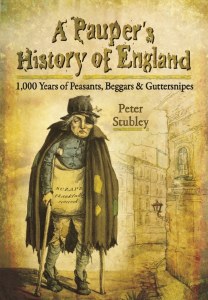 A Pauper's History of England : 1,000 Years of Peasants, Beggars and Guttersnipes

What would English history look like from the gutter? The past is traditionally told from the viewpoint of kings and queens, politicians and pioneers. But what about the people struggling to survive at the very lowest levels of society? Surely the poor are just as much a part of our heritage? A Pauper's History of England covers 1,000 years of poverty from Domesday right up to the twentieth century, via the Black Death and the English Civil War. It uses contemporary sources creatively to give the reader an idea of just what life was like for the peasants, paupers, beggars and the working poor as England developed from a feudal society into a wealthy superpower.

Experience the past from a different perspective: * Tour the England of the Domesday Book * Make a solemn Franciscan vow of Poverty * Join the Peasant's Revolt of 1381 * Converse with Elizabethan beggars' and learn their secret language * Meet the inmates of Bedlam Hospital and Bridewell Prison * Enjoy a gin-soaked Georgian night of debauchery * Spend the night in a workhouse * Go slumming in Victorian London