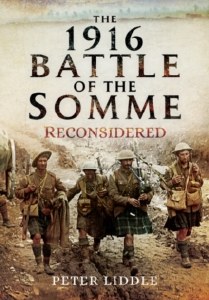 The 1916 Battle of the Somme Reconsidered

Twenty-four years after the publication of his classic study of the Somme, Peter Liddle reconsiders the battle in the light of recent scholarship. The battle still gives rise to fierce debate and, with Passchendaele, it is often seen as the epitome of the tragic folly of the First World War. But is this a reasoned judgement? Peter Liddle, in this authoritative study, re-examines the concept and planning of the operation and follows the course of the action through the entire four and a half months of the fighting.

His narrative is based on the graphic testimony of the men engaged in the struggle, not just concentrating on the front-line infantryman but also the gunner, sapper, medical man, airman and yes, the nurse, playing her crucial role behind the line of battle. The reader is privileged in getting a direct insight into how those who were there coped with the extraordinary, often prolonged, stress of the experience and maintained to a remarkable degree a level of morale adequate for what had to be endured.