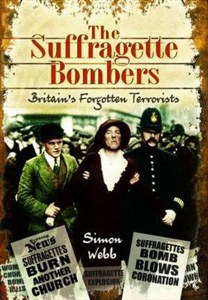 In the years leading up to the First World War, the United Kingdom was subjected to a ferocious campaign of bombing and arson. Those conducting this terrorist offensive were members of the Women's Social and Political Union; better known as the suffragettes. The targets for their attacks ranged from St Paul's Cathedral and the Bank of England in London to theatres and churches in Ireland.

The violence, which included several attempted assassinations, culminated in June 1914 with an explosion in Westminster Abbey. Simon Webb explores the way in which the suffragette bombers have been airbrushed from history, leaving us with a distorted view of the struggle for female suffrage. Not only were the suffragettes far more aggressive than is generally known, but there exists the very real and surprising possibility that their militant activities actually delayed, rather than hastened, the granting of the parliamentary vote to British women.