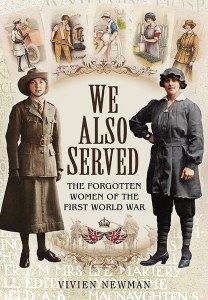 We Also Served : The Forgotten Women of the First World War

We Also Served is a social history of women's involvement in the First World War. Dr Vivien Newman disturbs myths and preconceptions surrounding women's war work and seeks to inform contemporary readers of countless acts of derring-do, determination, and quiet heroism by British women, that went on behind the scenes from 1914-1918. In August 1914 a mere 640 women had a clearly defined wartime role.

Ignoring early War Office advice to 'go home and sit still', by 1918 hundreds of thousands of women from all corners of the world had lent their individual wills and collective strength to the Allied cause. As well as becoming nurses, munitions workers, and members of the Land Army, women were also ambulance drivers and surgeons; they served with the Armed Forces; funded and managed their own hospitals within sight and sound of the guns. At least one British woman bore arms, and over a thousand women lost their lives as a direct result of their involvement with the war.

This book lets these all but forgotten women speak directly to us of their war, their lives, and their stories.

Although a relatively short book on such a vast subject, the author has researched far and wide and given a comprehensive global view of the role of women during WWI. With a steady progression through the war years, Dr Newman tackles all aspects starting with recruitment of women from the initial involvement of sending their 'boys' to fight and organising knitting clubs to provide garments the Government did not supply, such as socks and scarves, through the involvement of women from around the Empire in nursing in danger zones near the front lines, to spying and a myriad of other areas. These included fighting on the front lines in the Serbian army to the sad end suffered by so many - bereavement. This publication would have benefited from a more comprehensive bibliography rather than just a select one and, sadly, the index is woefully lacking, being only two pages containing names. A fuller, though not necessarily an academic, subject index that allows the reader to find various aspects within the text would have been a major asset to, what is, an extremely readable and informative book. The book is written in an easily readable prose with very little 'unnecessary' text and, although concise, it contains a great deal of information and enlightens the reader as to the variety of roles taken on by women during WWI, apart from the well-known knitting, collections, factory working and nursing. Anyone interested in the role of women during WWI and indeed some more obscure facts about them would enjoy reading this, as well as those with a general interest in WWI. Angela Blaydon Friends of The National Archives. http://nationalarchives.gov.uk/get-involved/friends.htm