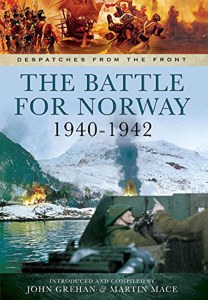 Despatches in this volume include that on the first and second battles of Narvik in 1940; the despatch on operations in central Norway 1940, by Lieutenant General H.R.S. Massy, Commander-in-Chief, North West Expeditionary Force; Despatch on operations in Northern Norway between April and June 1940; the despatch on carrier-borne aircraft attacks on Kirkenes (Norway) and Petsamo (Finland) in 1941, by Admiral Sir John C. Tovey; the despatch on the raid on military and economic objectives in the Lofoten Islands (Norway) in March 1941, by Admiral Sir John C.

Tovey, Commander-in-Chief, Home Fleet; and the despatch on the raid on military and economic objectives in the vicinity of Vaagso Island (Norway) in December 1941, by Admiral Sir John C. Tovey. This unique collection of original documents will prove to be an invaluable resource for historians, students and all those interested in what was one of the most significant periods in British military history.