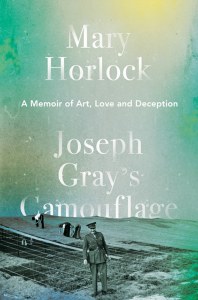 Joseph Gray's Camoflage : A Memoir of Art, Love and Deception

'Art? What has art ever done for us as a family?'In the First World War, artist-soldier Joseph Gray drew and painted scenes of battle, his illustrations appearing in the popular press and his canvases sold to museums. But after struggling through the next decade and facing the threat of another war, Joseph had found a secret new calling: the art of camouflage. As he went from representing reality to disguising it, Joseph's growing interest in camouflage concealed another, deeper subterfuge.

He was leading a double life, and would eventually leave his family for the woman that he loved. Joseph Gray's Camouflage is a multi-layered story of art, war, love and deception. Beyond attempting to pin down the image of a man who eludes us at every turn, it also traces the development of camouflage between the two wars and shines a light on the unlikely band of artists who made it happen.

Though private letters, diaries, archives and interviews Joseph's great-granddaughter Mary Horlock pieces together the truth that was once lost, and brings his far-from-ordinary life back into focus.