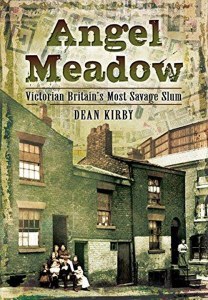 "It is all free fighting here. Even some of the windows do not open, so it is useless to cry for help. Dampness and misery, violence and wrong, have left their handwriting in perfectly legible characters on the walls."(Manchester Guardian, 1870.)Step into the Victorian underworld of Angel Meadow, the vilest and most dangerous slum of the Industrial Revolution.

In the shadow of the world's first cotton mill, 30,000 souls trapped by poverty are fighting for survival as the British Empire is built upon their backs.Thieves and prostitutes keep company with rats in overcrowded lodging houses and deep cellars on the banks of a black river, the Irk. Gangs of 'scuttlers' stalk the streets in pointed, brass-tripped clogs. Those who evade their clutches are hunted down by cholera, typhoid and tuberculosis.

Lawless drinking dens and a cold slab in the dead house provide the only relief from this filthy and frightening world.In this shocking book, journalist Dean Kirby takes readers on a hair-raising journey through the alleyways, gin palaces and underground vaults of this nineteenth century Manchester slum, which was considered so diabolical it was re-christened 'hell upon earth' by Friedrich Engels. Enter Angel Meadow if you dare...