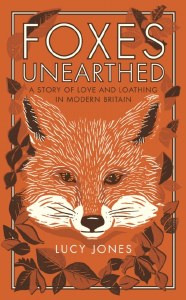 Foxes Unearthed : A Story of Love and Loathing in Modern Britain

As one of the largest predators left in Britain, the fox is captivating: a comfortably familiar figure in our country landscapes; an intriguing flash of bright-eyed wildness in our towns.; Yet no other animal attracts such controversy, has provoked more column inches or been so ambiguously woven into our culture over centuries, perceived variously as a beautiful animal, a cunning rogue, a vicious pest and a worthy foe. As well as being the most ubiquitous of wild animals, it is also the least understood.; In Foxes Unearthed Lucy Jones investigates the truth about foxes in a media landscape that often carries complex agendas. Delving into fact, fiction, folklore and her own family history, Lucy travels the length of Britain to find out first-hand why these animals incite such passionate emotions, revealing our rich and complex relationship with one of our most loved - and most vilified - wild animals.

This compelling narrative adds much-needed depth to the debate on foxes, asking what our attitudes towards the red fox say about us and, ultimately, about our relationship with the natural world.

This is a well-balanced study of our attitude to the fox in history, fables and Britain today. It examines how our relationship with the fox has developed over time and the extreme emotions of love and hate this creature can evoke. The author begins with the ideas and perceptions found in myth, folklore and literature concerning foxes, which are often accepted as truths. Against this background the author considers the increasing popularity for hunting amongst the aristocracy from the mid 1700's, at the same time as the first voices were being raised in support of animal welfare. This book does not deny the fact that foxes are skilled hunters and predators but questions the demonization the fox has inspired in certain quarters. It compares studies of this animal's behaviour by television wildlife presenters, zoologists and scientists with various government reports on the subject of farming and hunting and the experience of farmers and the wider rural community. The book raises some unexpected facts for the urban reader, such as the role played by rural foxes in keeping down the number of smaller mammals which feed on a wide range of crops. The book includes the results of interviews with farmers, game-keepers, pest-control officers, and representatives from the Countryside Alliance, animal rescue charities and the League Against Cruel Sports. Giving credibility to the views put forward by the author, the book includes details of her first-hand experiences in accompanying various individuals as they went about their work protecting us from the fox or the fox from us. One chapter is given over to the subject of fox hunting. It examines the history and etiquette of fox hunting from the eighteenth-century until 2005, when it was banned in the UK. The chapter continues with considered debate on the effectiveness of the ban and its impact on rural life. The book concludes with a study of the modern urban fox and the new myths and stories that have emerged through story-telling and media reports. This is a fascinating history of our relationship with the fox. Rhiannon Markless Friends of the National Archives http://nationalarchives.gov.uk/get-involved/friends.htm

Between Stone and Sky