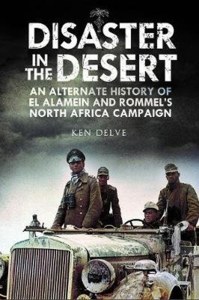 Disaster In The Desert

Summer 1942 and the war in the Middle East is in the balance; Rommel's Axis forces are posed on the borders of Egypt and all that is needed is one last push. For that to succeed, Rommel needs supplies and for the Allies to be denied supplies. With Malta still active and disrupting the Axis shipping routes across the Mediterranean he is denied those supplies.

Meanwhile, the Allied build-up continues, and Montgomery holds at El Alamein and then counter attacks Rommel is pushed back and then in a double blow, the Allies land in Tunisia. The collapse of North Africa leads to the invasion of Italy and contributes to the final Axis defeat. But what if Rommel had won?In this alternate history, Ken Delve proposes that with a few strategic changes by the Axis, poor decision by Allied Commanders, the outcome of could have been very different.

In this scenario, the Allied invasion in Tunisia fails, Rommel defeats Montgomery and seizes Egypt, leaving the Germans well-placed to sweep up through the Middle East, capturing oil installations and joining up with German forces in Russia.