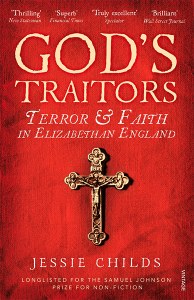 A woman awakes in a prison cell. She has been on the run but the authorities have tracked her down and taken her to the Tower of London - where she is interrogated about the Gunpowder Plot. The woman is Anne Vaux - one of the ardent, brave and exasperating members of the aristocratic Vauxes of Harrowden Hall. Through the eyes of this remarkable family, award-winning author Jessie Childs explores the Catholic predicament in Elizabethan England - an age in which their faith was criminalised and almost two hundred Catholics were executed.

From dawn raids to daring escapes, stately homes to torture chambers, God's Traitors exposes the tensions masked by the cult of Gloriana - and is a timely reminder of the terrible consequences when religion and politics collide.