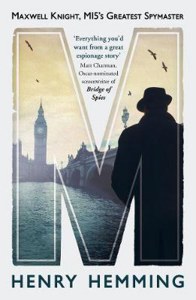 A jazz obsessive and nature enthusiast (he is the author of the definitive work on how to look after a gorilla), he is seen today as one of MI5's greatest spymasters, a man who did more than any other to break up British fascism during the Second World War - in spite of having once belonged to the British Fascisti himself. He was known to his agents and colleagues simply as M, and was rumoured to be part of the inspiration for the character M in the James Bond series.

Knight became a legendary spymaster despite an almost total lack of qualifications. What set him apart from his peers was a mercurial ability to transform almost anyone into a fearless secret agent. He was the first in MI5 to grasp the potential of training female agents.

M is about more than just one man however. In its pages, Hemming reveals for the first time in print the names and stories of seven men and women recruited by Knight, on behalf of MI5, and then asked to infiltrate the most dangerous political organizations in Britain at that time. Until now, their identities have been kept secret outside MI5.