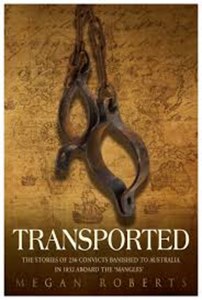 Transported : The Stories of 236 Convicts Banished to Australia in 1832 aboard the 'Mangles'

On 8 December 1832, the convict transport ship 'Mangles' departed from Sheerness with its cargo of 236 convicts bound for New South Wales, none of whom knew what fate had in store for them. The ages of the men and boys spanned from just 13 years-old to 54, and between them they left behind 46 wives and 133 children. Their crimes ranged from horse stealing, to counterfeiting, burglary, mugging, or just stealing apples. They had been sent from all corners of the United Kingdom, and one was even from Guyana in South America. They came from all walks of life: labourers, sailors, tradesmen, soldiers, urchins and craftsmen; and included the educated and the uneducated. Some of them would go on to carve out new lives in Australia, with new families; others would never cease fighting the 'system'; two would be sent to the gallows, whilst another two would be murdered. Others would leave the colony, either at the end of their sentences or by escaping. This book sets out to tell the stories of how each of them ended up on the 'Mangles', and what happened to them after they arrived in New South Wales.

Convicts in the Colonies

The Luck Of The Irish