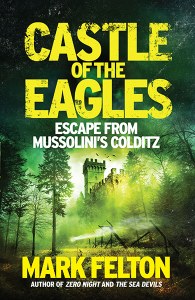 High in the Tuscan hills above Florence, an elaborate medieval castle, converted to a POW camp on Mussolini's personal orders, holds one of the most illustrious groups of prisoners in the history of warfare. The dozen or so British and Commonwealth senior officers includes three knights of the realm and two VCs. The youngest of them is 48, the oldest 63.

One is missing a hand and an eye. Another suffers with a gammy hip. Against insuperable odds, these extraordinary middle-aged POWs plan a series of daring escape attempts, culminating in a complex tunnel deep beneath the castle.

One rainswept night in March 1943, six men will burst from the earth beyond the castle's curtain wall and slip away. By assorted means, the three Brits, two New Zealanders and a half-Belgian aristocrat will attempt to make it to neutral Switzerland, over 200 miles away.