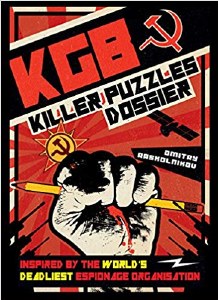 For half a century, the KGB was the most feared agency in the world, and the security organisation's noble agents operated in secret to further the glorious Soviet cause in countries around the globe. In the KGB Killer Puzzles Dossier you can attempt to crack the codes and solve the puzzles that the KGB would have set their finest agents in order to ensure they were ready for their time in the field. More than 100 tests of memory, cryptic ciphers and logical brainteasers await those who want to learn more about the dark arts of the greatest spies ever.

Further, a series of survival secrets are revealed to ensure your time under cover is not quite as short-lived as the enemy agents would like.

The Sherlock Holmes Case Book Solve It Yourself