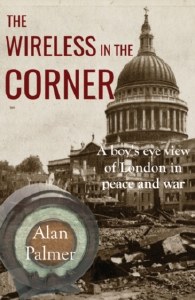 The Wireless In The Corner

The Wireless in the Corner : A Boy's Eye View of London in Peace and War

Based on diary entries, family letters, photography albums and newspaper cuttings, The Wireless in the Corner is the personal account of a boy brought up in London's suburbia during the second quarter of the 20th century, the years English historian, Asa Briggs, called 'the Golden Age of Broadcasting'. Drawing on his sharp visual and aural memory, author Alan Palmer recounts his early life as the only child of elderly parents living at Gants Hill in unfashionable Ilford. After a trip to Belgium, aged six, Alan became gripped by the events in Europe and observing international affairs became as much a hobby as collecting stamps.

Listening to the wireless every evening, Alan's childhood is as much a personalised political, social and military history as it is reminiscence. The Wireless in the Corner is written with the intention of recapturing the strain of the Blitz, and later of flying bombs and rockets, and the relieving moments of peace and contentment that were held so dear to the author. The book carefully distinguishes between what was known then and what readers know now, so as not to obscure events with thoughts based on present assumptions.