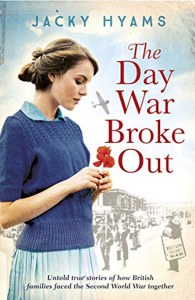 The Day War Broke Out

The Day War Broke Out : Untold True Stories of How British Families Faced the Second World War Together

Sunday, 3 September 1939: the dawn of a new conflict that would engulf the world, following the words of Prime Minister Neville Chamberlain: 'This country is at war with Germany'. By the time World War II ended in 1945, nearly half a million people from Britain and its empire had lost their lives, and the world had changed forever. Eighty years on, a look back at the lives of British people in September 1939 reveals a very different world from the one we know today.

Unprecedented hardship lay ahead for a country where free healthcare for all was unknown: strict rationing of food and petrol, conscription for both sexes, and personal tragedy year after year amidst the chaos of Britain's bombed out cities and ports. What was it really like to be living in Britain in September 1939? The Day the War Broke Out is a fresh insight into the hearts and minds of a nation on that fateful day. With exclusive personal interviews, untold stories, wartime diaries and newspaper reports, it reveals the innermost fears and hopes of a society on the brink of war: through the eyes of young mothers fearful for their families, bewildered children painfully cut adrift from loved ones, and men of all ages, many now facing combat for the second time in their lives.

These are personal, intimate snapshots from eighty years ago - when the entire world, virtually overnight, seemed to have been turned upside down - and of how a nation faced this new world with courage, humour and stoicism.

To War With The Walkers