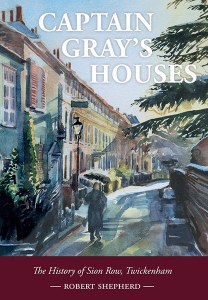 Twickenham is chiefly known today as the home of rugby, but its heyday could be said to be in the eighteenth century when first Alexander Pope and then Horace Walpole made it their home and extolled its Arcadian setting.

Captain Gray, a naval officer, acquired plots of land close to the river in Twickenham in 1718 on which he built two rows of houses, Sion Row and Montpelier Row, which survive to this day and are much admired.

This book tells the story of Sion Row, which was built for Gray by a remarkable local craftsman, Edward Reeves, who had ambition to become an architect. It explains the features of the houses and how they were built. It then follows them through to the present day showing how they were used and what modifications have been made to them and, not least, how they survived.

In parallel we learn of the owners and the residents, many of whom have fascinating stories to tell. They are immensely diverse, some international, some purely local, some disreputable, others pillars of respectability.

Their lives are put in the context of changes in Twickenham as it evolved from out of town retreat to prosperous commuter suburb. In telling the story of these houses and people, a remarkable social history is revealed.