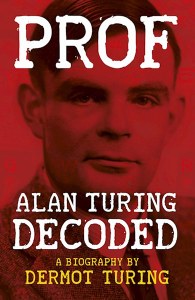 Alan Turing was an extraordinary man who crammed into a life of only 42 years the careers of mathematician, codebreaker, computer scientist and biologist. He is widely regarded as a war hero grossly mistreated by his unappreciative country and it has become hard to disentangle the real man from the story. It is easy to cast him as a misfit, the stereotypical professor.

But actually Alan Turing was never a professor, and his nickname 'Prof' was given by his codebreaking friends at Bletchley Park. Now, Alan Turing's nephew, Dermot Turing, has taken a fresh look at the influences on Alan Turing's life and creativity, and the later creation of a legend. For the first time it is possible to disclose the real character behind the cipher-text: how did Alan's childhood experiences influence the man? Who were the influential figures in Alan's formative years? How did his creative ideas evolve? Was he really a solitary, asocial genius? What was his wartime work after 1942, and why was it kept even more secret than the Enigma story? What is the truth about Alan Turing's conviction for gross indecency, and did he commit suicide? What is the significance of the Royal Pardon granted in 2013?In Dermot's own style he takes a vibrant and entertaining approach to the life and work of a true genius.

In eleven well-balanced chapters, Dermot Turing provides a readable and apparently authoritative account of his uncle's life and death. Rather than bias, their familial relationship and their common bond with Sherborne School add a little warmth to the book. Although few of us can really understand most of Turing's work, 'Alan Turing Decoded' enables us at least to glimpse his genius. Less importantly, this reader did not find it easy to work out the first-name references to Turing's family and friends, found the presentation of the numerous quotations disconcerting, and was concerned by the lack of an index. The author's comments on other recent accounts of Turing's life are disappointingly brief. After childhood, Sherborne, King's and Princeton, the decryption of Enigma falls nicely into the middle chapter of this biography. Oddly enough, each side had broken the other's code but thought its own unbreakable. However, from 1942 the Allies saw the need to apply Turing's ability to the protection of their communications. After the war, with computer development under-funded, he played a key role in the most successful British team at Manchester, and dabbled with the logical explanation of morphological patterns: all of this is nicely summarised. Dermot Turing's references to Alan Turing's homosexual behaviour remain coded, but he provides a lucid explanation of how in 1952 this was punished more harshly than before or since, and a moving account of his family's response to Turing's death. This provides a memorable component of a memorable book. David Walker Friends of The National Archives http://nationalarchives.gov.uk/get-involved/friends.htm