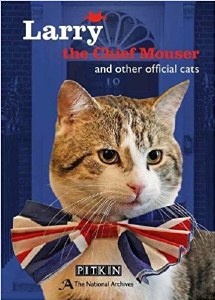 Larry, The Chief Mouser : And Other Official Cats

For 200 years the government has used cats to rid their buildings of mice. For a long time the animals remained unofficial, but then in the 1930s government departments started to apply to the treasury for a feline upkeep allowance. The cats thus became 'official' members of government and, as it turned out, well loved.

There are many funny stories linked to these cats: Home Office cat 'Peter the Great' became a celebrity in 1958 when the public issued concerns that he wasn't being paid enough; Peter's successor, unusually a female Manx cat, was considered to have a 'diplomatic background' and thus gained a pay rise! More recent cats include Chief Mouser Larry, who appeared at David Cameron's resignation speech, and the Foreign Office cat Palmerston, who has a substantial Twitter following. Including letters and memos held by The National Archives, plus photographs of the cats themselves, this book takes a fresh approach to what goes on at Whitehall.

The White Cat And The Monk