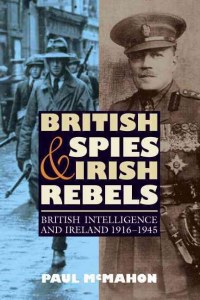 One of the Irish Times' Books of the Year, 2008 The struggle between British intelligence agencies and Irish revolutionaries has lasted for centuries - and still goes on. But it was at its most intense during the first half of the twentieth century. Ireland experienced a bloody rebellion, bitter partition and a stuttering march towards independence.

Britain grappled with imperial decline and world war, while worrying about being stabbed in the back by its Irish neighbour. Using recently opened archives, this book reveals for the first time how intelligence and intelligence agencies shaped Anglo-Irish relations during this formative period. The book casts light on characters long kept in the shadows - IRA gunrunners, Bolshevik agitators, Nazi saboteurs, British double agents.

It shows what happened when Irish revolutionaries stopped fighting, formed governments and started sharing information with London - while doing everything possible to hide this from the Irish public. It also fills in a missing chapter in the history of the British intelligence community, tracing its evolution from amateurish beginnings, through a painful adolescence, to the sophisticated apparatus that is largely still with us. The book probes some deeper questions about intelligence and the complex Anglo-Irish relationship.

What has the most influence on government policy? The work of professional intelligence agencies? Or the misconceptions and preconceptions that politicians and civil servants bring to their jobs? Why are secrets so seductive - and sometimes so misleading? Packed with anecdotes and unexpected paradoxes, this book provides new insights into the history of the British intelligence community and helps explain the twists and turns of Anglo-Irish relations during a time of momentous change. The lessons it draws still echo today, as Britain contends with the threat posed by violent militants, whether from Ireland or further afield. PAUL MCMAHON received his bachelor's degree from University College Dublin, before studying for an MPhil and a PhD at Cambridge University.

He has worked as a management consultant and policy advisor focussing on climate change and food security. He now lives in London.