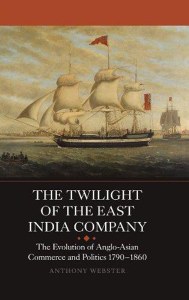 Twilight of the East India Company : the Evolution of Anglo-Asian Commerce and Politics 1790-1860

This book examines the development of British commercial, financial and political relations with India and the Far East during the final period of the East India Company's reign as the sovereign power in India. This was a most turbulent period for British commerce with India. The period began with the renewal of the East India Company's Charter and its component monopolies of trade with India and China, but this was quickly followed by the outbreak of the Napoleonic Wars, which spread to the east and saw the completion of Britain's assertion of power over India and much of Southeast Asia.

However, the war also strengthened those political forces in Britain campaigning against the Company's monopolies of trade with India and China, which were consequently abolished under the Charter Acts of 1813 and 1833. The spectacular growth of the British economy following industrialisation brought new forces to bear upon India, with the rise of manufactured exports to the east. But the course of commercial relations did not run smoothly, and economic crises in Britain and India in 1833 and 1848 swept away commercial firms in both countries, and caused severe economic retrenchments.

This instability severely hampered efforts to facilitate the export of capital to India during the first half of the century. Finally the rebellion of 1857 spelt the death knell for the Company, and ushered in a new phase of Anglo-Indian economic relations, in which British foreign investment grew substantially. Anthony Webster is Programme Leader - History, in the Department of Humanities and Social Science at Liverpool John Moores University.