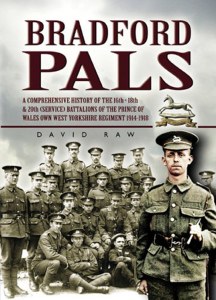 Bradford Pals : A Comprehensive History of the 16-18th & 20th (Service) Battalion of the Prince of Wales Own West Yorkshire Regiment

In the early days of the First World War two volunteer Pals Battalions were raised in Bradford and this is their remarkable story. David Raw's account is based on memoirs, letters, diaries, contemporary newspaper reports, official records and archives, and it is illustrated with many maps and previously unpublished photographs. He recaptures the heroism and stoical humour displayed by the Bradford Pals in the face of often terrible experiences, but he also recounts the tragedy, pain, suffering and grief that was the dark side of war.