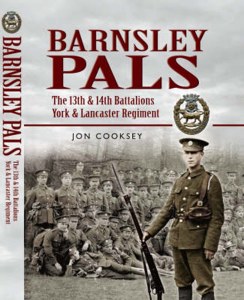 The 'Pals' battalions were a phenomenon of the Great War, never repeated since. Under Lord Derby's scheme, and in response to Kitchener's famous call for a million volunteers, local communities raised (and initially often paid for) entire battalions for service on the Western Front. Their experience was all too frequently tragic, as men who had known each other all their lives, had worked, volunteered, and trained together, and had shipped to France together, encountered the first full fury of modern battle on the Somme in July 1916. Many of the Pals battalions would not long survive that first brutal baptism, but their spirit and fighting qualities have gone down into history - these were, truly, the cream of Britain's young men, and every single one of them was a volunteer.