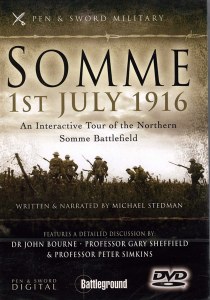 This ground breaking series of military DVDs is launched here with the release of Somme, 1st July 1916 - Northern Sector. The DVD covers the events of 1st July in the areas from Gommecourt, Serre, Beaumont Hamel, Thiepval to Ovillers.

It contains a visual tour of each of the key areas in the northern sector, together with maps, archive film and contemporary stills. Key attacks are introduced and narrated and guidance is given on how to visit the battlefields today.

Included is an interactive, then and now, panoramic views from certain key points of the Battlefield and a contemporary map of the whole front, not seen before. Also featured is a debate on the controversies and theories that have evolved over the years since the battle, from three key Great War historians, courtesy of the War Studies Department at the University of Birmingham, these being: Gary Sheffield, Peter Simpkins and John Bourne.