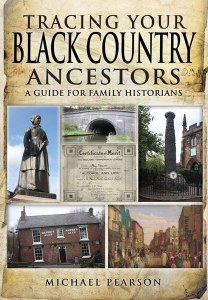 Tracing Your Black Country Ancestors : A Guide for Family Historians

The Black Country in the West Midlands is an important site for family historians. Many researchers, seeking to trace their ancestry back through the generations, will find their trail leads through it. And yet, despite the burgeoning interest in genealogy and the importance of the region in so many life stories, no previous book has provided a guide to the Black Country's history and to the documents and records that family historians can use in their research.
In this accessible and informative introduction to the subject, Michael Pearson looks at the history and heritage of the region and gives a graphic insight into the world in which our ancestors lived. He concentrates on the role the Black Country played during the industrial revolution when the development of mining, industry and transport transformed the economic and social life of the area. This was a period when living and working conditions were poor, families were large, children worked from an early age, often in the mines, and life expectancy was less than 20. And it was the era in which the Black Country took on the distinctive identity by which it is known today.
As well as retelling the fascinating story of the development of the Black Country, the author introduces the reader to the variety of records that are available for genealogical research, from legal and ecclesiastical archives, birth and death certificates to the records of local government, employers, institutions, clubs, societies and schools.

A fairly recent addition to the extensive Pen & Sword family history series, this guide comprises 160 pages about local history, 30 pages about local records and a useful index. Four well-illustrated chapters are devoted to local industries: mining, iron and steel, transport and the astonishing diversity of manufacturing which characterises the Black Country. Another four provide well-summarised histories of local life, recreation, religion and crime and punishment. The author clearly is proud of the Black Country and well qualified for his task. It is very relevant to family historians that he examines the reasons both for the expansion and for the decline of its specialised firms, which in their heyday exported goods around the world. The second section, on local archives and records, provides a useful listing of the hotchpotch of resources that arises from the complicated history of local government, but it surely would have benefited from more than one small-scale map, and a better account of local newspapers. At first sight this section is very lacking in illustrative detail, but this is to some extent compensated by the social history, the detailed job descriptions and indeed the references to local records in the first eight chapters. In short, this book provides only a very brief introduction to tracing our Black Country ancestors, but it is recommended as a very readable and apparently authoritative guide to their social history. David L Walker Friends of The National Archives. http://nationalarchives.gov.uk/get-involved/friends.htm