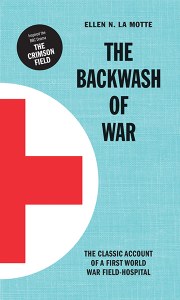 The Backwash Of War

Backwash Of War : The Classic Account of a First World War Field Hospital

The ‘backwash’ of Ellen La Motte’s controversial book are the dirty, smelly, lice
and disease ridden bodies of wounded French soldiers brought into her field
hospital, 10 kilometres behind the Western Front of the First World War. They
compose the ‘human wreckage’ of highly organised and industrialised warfare.

Arranged into fourteen vignettes, The Backwash of War paints a picture of that
conflict which seems so familiar to modern readers with nearly a century of
writing about it to draw on.
Yet, even with the passage of time, Ellen La Motte’s first hand observations and
comments, sometimes cynical, sometimes poignant, retain a freshness and
continue to make for compelling reading. Her graphic and highly vivid studies of
how modern weapons of war can truly wreck the human body and mind remain
a potent reminder of the true costs of conflict. No wonder the American
Government banned The Backwash of War in 1918.

Ellen La Motte was an independent and extremely articulate American nurse who volunteered at a French Army Field hospital ten kilometres from the Belgian front-line. What she found there appalled and depressed but did not silence her. Her sketches of life in a working field hospital appeared in the Atlantic Monthly and were later published as The Backwash of War. Ellen pulled no punches. Her descriptions of the effect of modern industrialised warfare are clear-sighted, cynical sometime darkly humorous. There is real human tragedy here amid mud and blood and sweat and puss. There is futility, cowardice and self-interest but most of all there is fear and pain and anger. This book is stark and revealing. If now one hundred years later the ugly side of war is known to us this was not the case in 1915 when the English public fed on a diet of patriotism and romance were largely shielded from the true extent of the horror. Ellen's words were banned at the time and suppressed for two years because of the detrimental effect they were deemed to have on morale. The centenary of the First World War has resulted in a deluge of words and it would be easy to suffer from overload but this book is an essential read. As harrowing and disturbing as it was in 1915 Ellen's voice still resonates. As she said herself "there are many people to tell you of the noble side, the heroic side, the exalted side of war. I want to tell you of what I have seen, the other side , the backwash. They are both true." Sally Hughes Assistant Retail Manager , The National Archives Bookshop